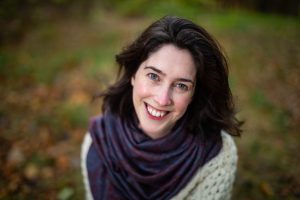 Hello! I’m Leah. A writer and poet living in a little house in a tiny hamlet in the English Lake District. You’ll feel right at home here if you’re the highly sensitive type with a rebellious spirit, a love of nature and a longing for the simplicity and quiet of a time gone by.

If you’d have told me a year ago that I’d be having an actual meltdown over a compost bin, I never would have believed you.

But you would have been right. I really did have a meltdown over a compost bin.

Compost bin building became my new obsession. I watched hours worth of YouTube videos in the hope of finding the perfect DIY bin. The problem was that each video I watched gave slightly different advice to the last. The more I watched, the more overwhelmed I became and the more this thing that initially seemed like it should be super simple became really rather super complicated.

I had to take an enforced break from compost bin research to maintain my sanity.

Eventually, I stumbled upon a design that truly was simple, from a gardening pro I trusted and respected. But then another problem arose. It felt too simple. I mean, it felt so simple that it couldn’t possibly be any good and I wanted my compost bin to be really, really good.

I decided to acknowledge my perfectionism, have a gentle but firm word, and move ahead. I carried the pallets across the garden, put them in place, temporarily tied them together with some string (whilst I waited to get some wire), lined the pallets with big sheets of cardboard for insulation et voilà, I had my first DIY compost bin.

Little Miss Perfectionist shrieked in my ear a little while longer (“you can do better!”) but eventually calmed down and accepted that this bin is more than ok for now and that there’ll be time and opportunity to improve on this design, if and when necessary in the future.

Sensitive people all over the world know what this experience feels like – to feel so utterly overwhelmed by a task because of the strong drive to do it perfectly. We’re courageous and adventurous, wanting to learn how to do new things all the time, yet we’re not always brilliant at giving ourselves room to make mistakes or learn as we go. We expect so much from ourselves and we expect it all now!

But listen, though overwhelm and perfectionism may feature in our lives more often and more strongly than for some other people, we’re capable – more than capable – of doing whatever we set our minds to.

For you it’s probably not a compost bin (but maybe?), but perhaps there’s something else in your life right now that you want to do or achieve that’s really important to you. So important, in fact, that the perfectionism and overwhelm are lurking constantly just around the corner.

In the moments when you feel like it’s all too much and you’ll never get there, I want you to remember this:

And then I want you to picture me sitting gleefully on top of a pile of compost inside my beautiful new bin and know that you will be sitting on top of your own metaphorical pile of compost soon too, with a grin just as big across your face.

You can do difficult things.